The Watercube associates water as a structural and conceptual “leitmotiv” with the square, the primal shape of the house in Chinese tradition and mythology. 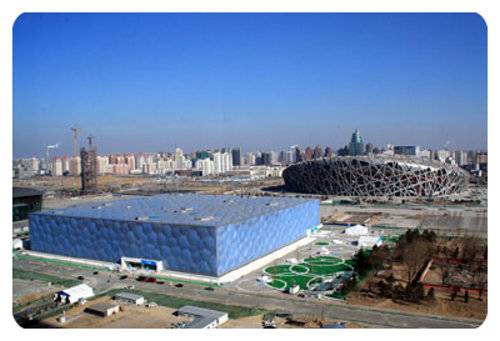 Architect Chris Bosse has sent us a series of photos of the National Aquatics Centre in Beijing – better known as Watercube – which officially opened on Monday 28th January 2008. 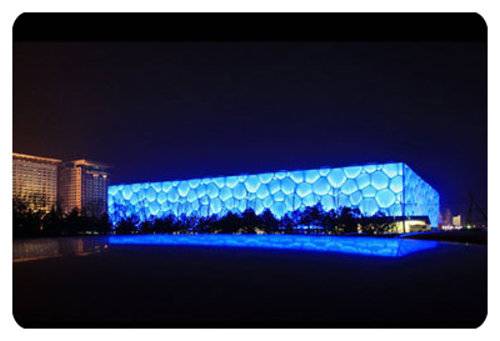 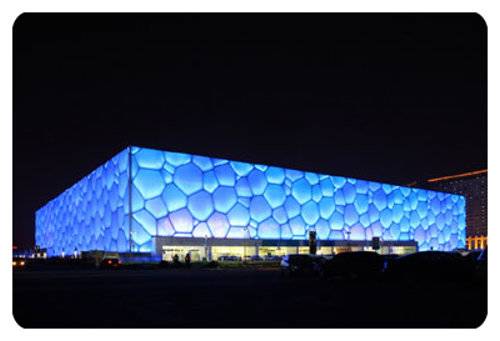 The centre, which will host the swimming and diving competitions at the Beijing 2008 Olympic Games in August, hosted its first event, the Good Luck Beijing 2008 Swimming China Open, on February 4th. 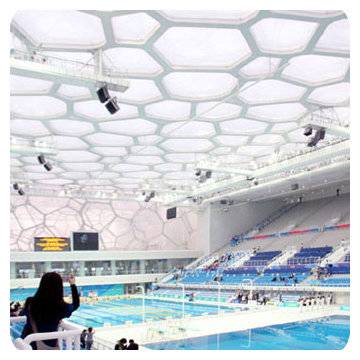 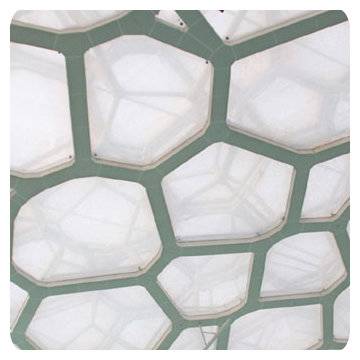 The structure of the WATERCUBE is based on a unique lightweight construction, developed by China State Construction Design International (CCDI), PTW Architects, and ARUP, and derived from the structure of water bubbles in the state of aggregation found in foam.

Behind the totally random appearance hides a strict geometry that can be found in natural systems like crystals, cells and molecular structures – the most efficient subdivision of three-dimensional space with equally sized cells.
The transparency and apparent randomness is equally transposed into the inner and outer building-skins, made of inflated ETFE cushions. 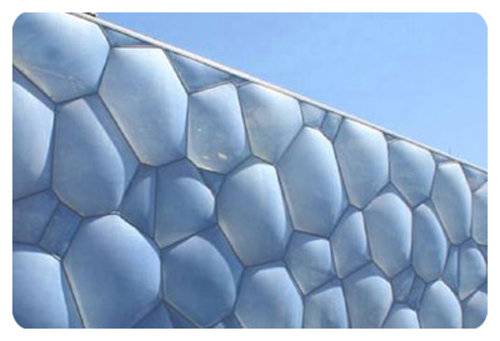 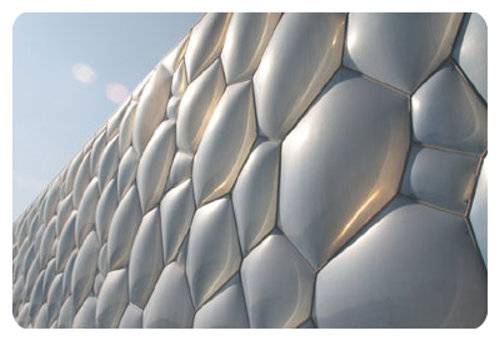 The reason for different coulours is The reflection of light changes the color; outside it reflects the sky and the outer layer is slightly tinted in blue, Inside the white prevails, the sun coming through highlights the ETFE and the structure. 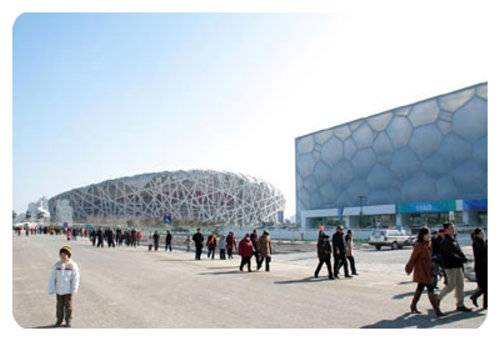 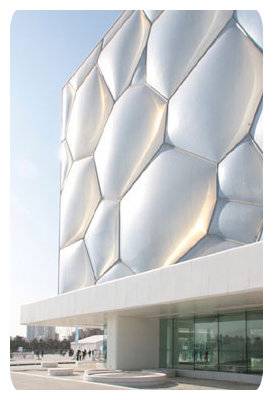 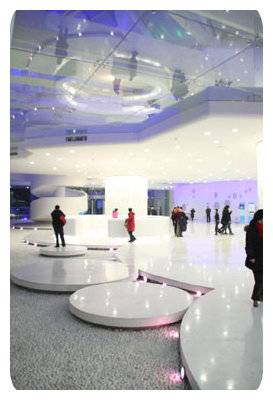 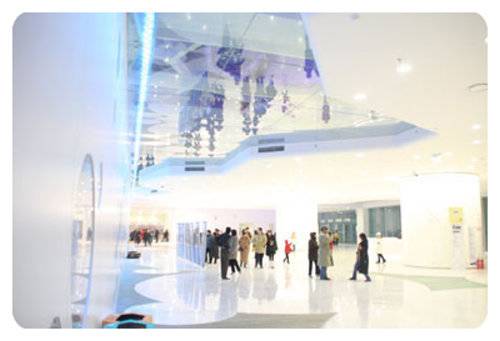 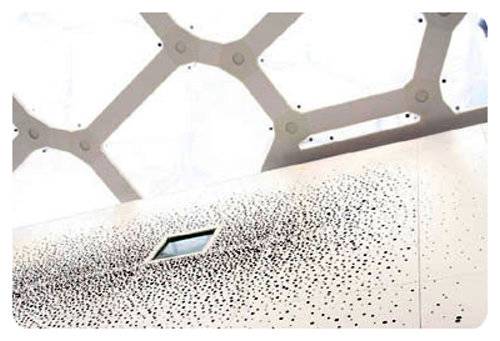 Unlike traditional stadium structures with gigantic columns & beams, cables & spans, to which a facade system is applied, the architectural space, structure and facade of the Watercube are one and the same element. 90% of the solar energy falling on the building is trapped within the highly efficient structural zone and is used to heat the pools and the interior area.
Rainwater from the roof is reused, recycled and redistributed alongside efficient pool filtration and backwash systems. 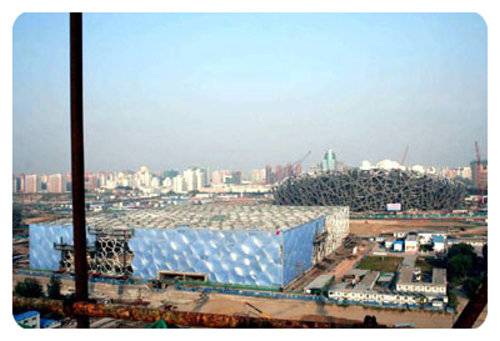 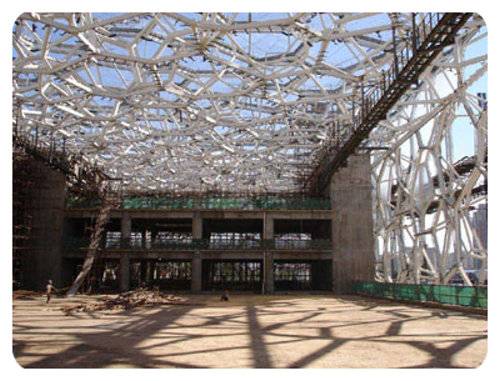 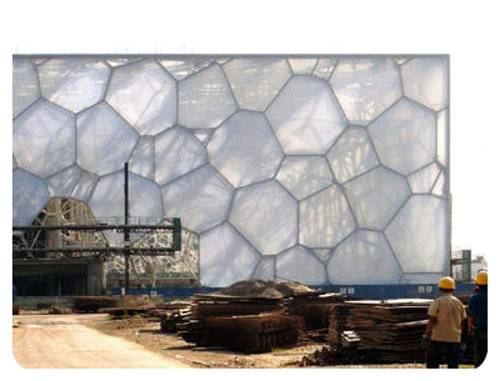 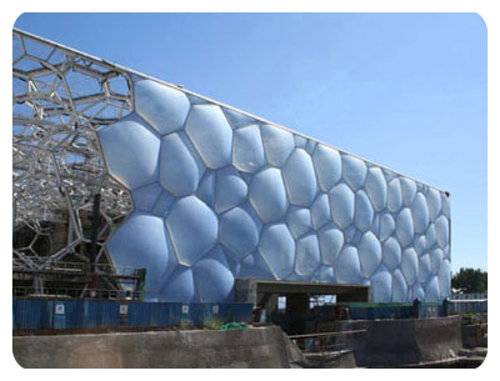 The design uses state-of-the-art technology and materials to create a visually striking, energy-efficient, and ecologically friendly building. Conceptually the square box and the interior spaces are carved out of an unconfined cluster of foam bubbles, symbolizing a condition of nature that is transformed into a condition of culture.

Together with the main stadium by Herzog & de Meuron, a duality between fire and water, Yin and Yang, is being created with all its associated tensions and attractions.
The Project was recently recognized at the Venice Architecture Biennale for “demonstrating in a stunning way, how the deliberate morphing of molecular science, architecture and phenomenology can create an airy and misty atmosphere for a personal experience of water leisure.”