Techzug.comTechnology In Your Hands
Home Architecture Most Amazing Tiny Homes

This 78-square-foot living space may be one of the smallest apartments you will ever see. Located in the midtown Manhattan neighbourhood of Hell’s Kitchen, it’s the home and office of architect Luke Clark Tyler.

Tyler, a graduate of Cornell University, actually lived in a 96-square-foot space previously and decided to downsize even further by moving to this apartment. To make it livable, Tyler designed and hand-built his own transformer furniture out of plywood and 2×4’s to make the most out of what might have been a tight space.

It’s barely wider than a hallway, but thanks to the high ceilings and thoughtful design and conscious lifestyle changes, Tyler is able to gain in savings: he pays $800 a month in rent — cheaper than the shared housing in the same area. In addition, rather than purchasing expensive furniture, his customized build-out only cost him $170 at Home Depot. 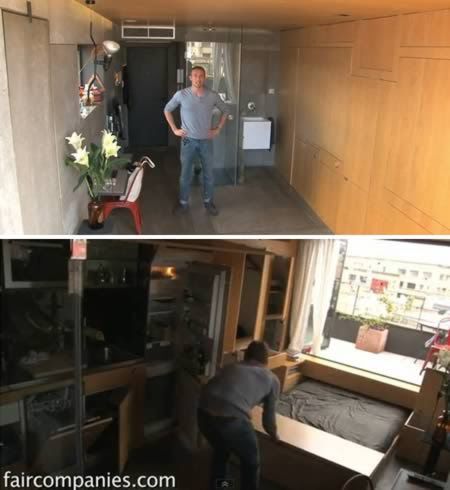 When Christian Schallert isn’t cooking, dressing, sleeping or eating, his 24-square-meter (258 square feet) apartment is an empty cube. To use a piece of furniture, he has to build it. To sleep, he rolls his bed out from under the balcony, his stairs become bedside tables and he can even swing his TV out from the wall.

To dine, he lowers a plank from the wall, his flower stand becomes a support and his stairs become a bench. To cook, he clicks a spot on his vast wall of clickable furniture, and a spring-loaded door swings up to reveal an instant kitchen with double-burner, dishwasher, sink, countertop and microwave oven. The full-sized refrigerator and freezer click open alongside the other appliances.

Located in Barcelona’s hip Born district, the tiny apartment is a remodeled pigeon loft. Christian, a Barcelona-based photographer, says its design was inspired by the space-saving furniture aboard boats, as well as the clean lines of a small Japanese home. While there’s undoubtedly more work involved in constructing and deconstructing your dining room/kitchen/bedroom every day or meal, Christian claims that it helps keep him in shape.

Check the video below to see Christian showing his amazing LEGO-style home.

Who says you need a big house with an expansive yard to achieve the American Dream these days? One Washington State resident has found her perfect home in the 140 square feet of living space she’s built herself. Located in Snohomish, WA, Apartment Therapy reader Melissa submitted her teensy abode as part of the site’s Small Cool 2013 contest.

It’s a basic bungalow-style house with an elevated sleeping loft over the kitchen. The wood slat construction gives the home a rustic feel, which is nicely countered by the super-sized flat screen in the living room. 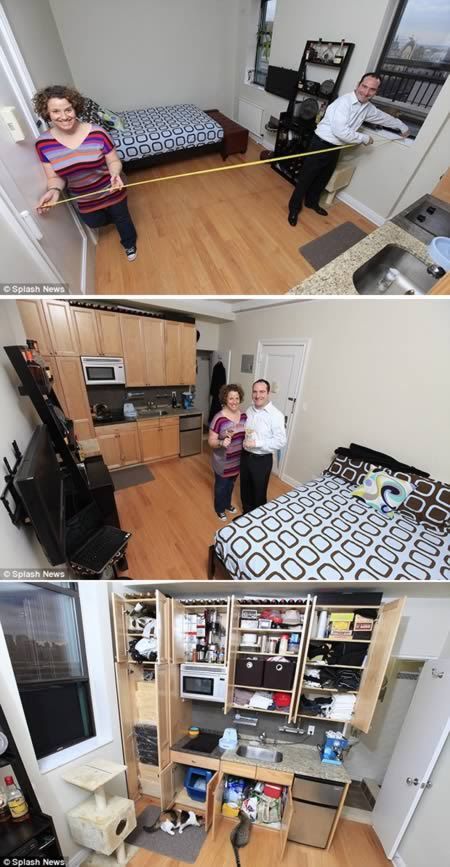 Not many couples could live in complete harmony in a space that the New York Post calls the “smallest apartment in the city,” but Zaarath and Christopher Prokop — with their two cats — live in a 175-square-foot “microstudio” in Manhattan’s Morningside Heights.

• A queen-size bed (about 1/3 of their living space)
• Mini-fridge and hot plate (they don’t eat in very often)
• One kitchen appliance (a cappuccino maker)
• Closet-sized bathroom with shower with sink and toilet (no long, luxurious baths here)
• Kitchen cabinets that are used for their clothing (they don’t eat here, remember?)
•
With a space this small, they jog to work, picking up their clothes along the way at various dry cleaners around the city and some clothes are kept in their offices.

The Prokops plan to pay off their mortgage in two years and then plan to remodel by installing a Murphy bed and larger windows. Their only cost at that point will be a maintenance fee of $700 a month. 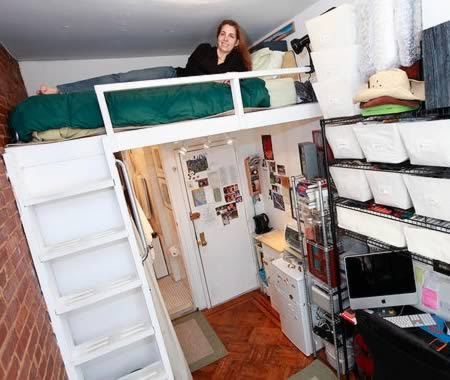 This article is all about pretty tiny apartments, but we were absolutely blown away when we came across New Yorker Felice Cohen’s itty bitty, teensy weensy, 90 sq. ft. studio on the Upper West Side. The 12 by 7 foot apartment definitely isn’t for the claustrophobic, but we think Ms. Cohen managed to live there in high style. Plus, if you consider that she only used to pay $700 a month for her miniature pad (in a neighborhood where monthly rents average about $3,600), you can see how her decision allowed her to live large in other ways.

After 5 years, she finally saved enough money to move to an apartment five times bigger.

Polish architect Jakub Szczesny claims to have built the world’s narrowest house, just 122 centimeters across at its widest point. The Keret House is squeezed into a crevice between two buildings in the center of Warsaw and will provide a temporary home for travelling writers.

Szczesny, who is one of the co-founders of the arts group Centrala, approached Israeli writer Etgar Keret to get involved in the project and the pair started developing a triangular house with just enough space for a single inhabitant to live and work.

The body of the house is raised up on stilts and a staircase leads inside from underneath. At its narrowest point the house is no more than 72 centimeters wide.

How do you make a tiny New York City apartment into a livable 240-square foot space with a sleeping loft? You enlist the help of Brooklyn architect Tim Seggerman, who renovated this Upper West Side brownstone studio into what it is today.

The space was in poor shape to begin with, so they incorporated blond woods to build the interior out, including the loft over the kitchen. A nook creates a cubby-like library to crawl into.

Can you believe they were able to fit a washing machine in there?!

Airplane interiors engineer for Boeing, Steve Sauer combined custom furniture from Ikea and West Elm to get the most out of his 182-square-foot home. Inspired by boats, Sauer’s tiny Seattle home is pretty remarkable.