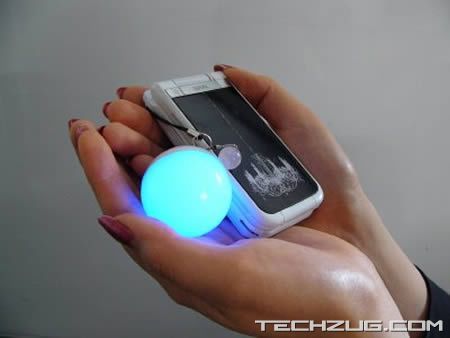 Solid Alliance has developed a new phone accessory, an aura sensing phone strap. The accessory, dubbed "aura tama" strap or aura ball strap, claims to be able to sensor the user’s aura and changes to one of eight different colors depending on the energy the person is omitting. The aura-tama will be packaged with one of three "power stones”: crystal, rose quarts or amethyst. 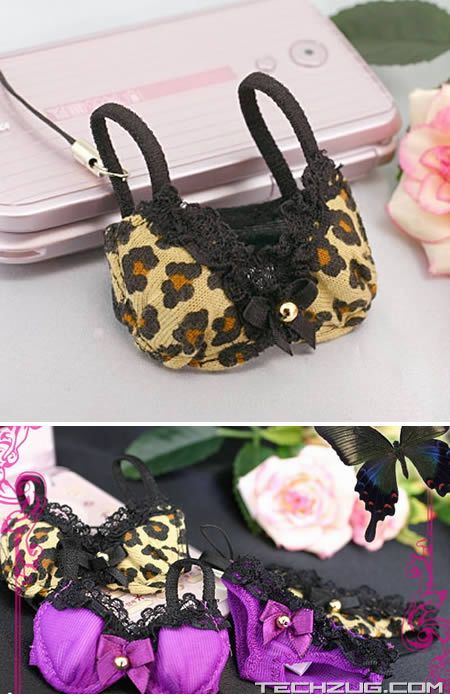 Want some sexy underwear as your cell phone straps? I bet only girls would dare to buy and use it… some weird old men might buy it for personal collection though. 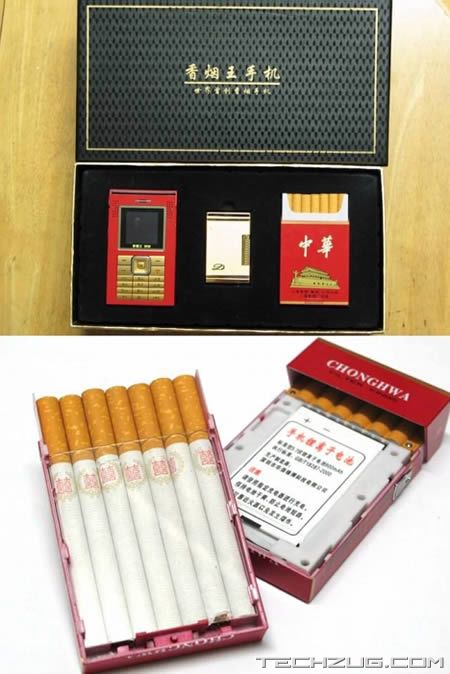 In order to appeal to billions of smokers in China, a company has brought out this ultimate cigarette phone. Not only does it look like a pack of cigarettes (the exact size and the exact warning labels concerning health), it actually holds half a pack of REAL cigarettes on the back. All you need to do is to slide open the battery cover and you’re set to make new friends. The phone itself runs on dualband GSM, takes microSD cards, plays MP3, has a color screen and a VGA camera on the side. For $175 you will get a whole luxurious VIP kit with the phone, a pack of Chonghwa branded cigarettes as well as a lighter.
4. Mobile Phone Telescope

You are a Paparazzi and have just seen Victoria Beckham walking on the other side of the street. But you do not have your trusty SLR camera with you only your camera phone. Good thing to have in this situation is the 6X Telescope lens for mobile phones. As you have to exchange the back-shell of your mobile phone with the one bundled to be able to mount the lens, it is not going to work with all mobile phones. Only Nokia 6230 and 6680 mobile camera phones are supported at this moment. Brando sells the Mobile Phone telescope lens for only $19.00 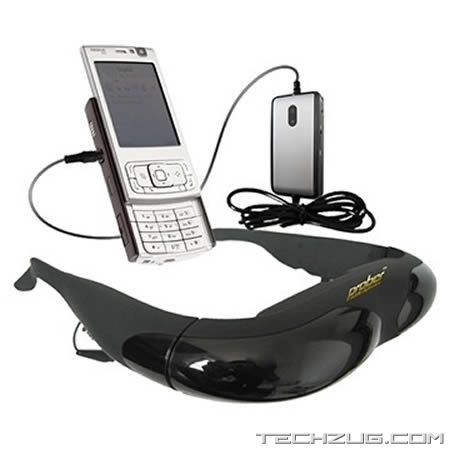 Surely a front runner in the “Most Likely to Cause Severe Retinal Damage” awards, this device claims to simulate a virtual 50 inch screen by placing tiny screens very close to the user’s eyes. Theoretically a solution to the irritation of watching video on a small cell phone screen, the inclusion of headphones apparently allows for some serious immersion.

This accessory is self explanatory. It’s a piece of shit and you can squeeze it too. 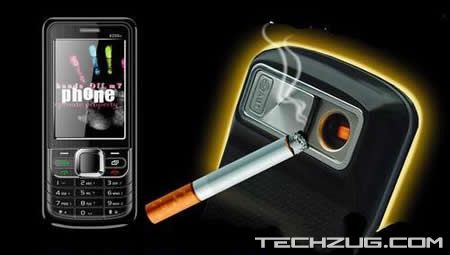 If you can’t go very long without a smoke pressed between your lips and your cell pressed to your ear, you might need a way to join the two mediums. Sure, we’ve seen the device which swears to be the ultimate smoker’s phone, but where is the lighter? The SB6309 Cigarette Lighter Phone includes a lighter in its ingeniously deadly design. Slip the protective cover back and flick the lighter button. Soon enough, you’ll be flaming mon. 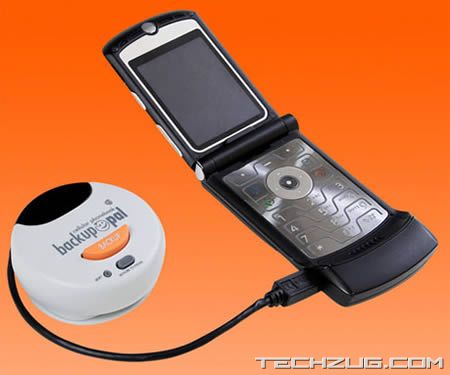 Most of the people living in modern society rely on hi-tech severely. You don’t have to remember any phone number, because you can find it from your cell phone easily. However, what if you lost your cell phone? It might cause that all your friends will be lost forever. I’m not alarmist, but it is true. Sure, you can back up your contacts with your computer, but it is a little bit complex. So I bet you need this backup pal. Just connect your cell phone with this cute gadget and then press the button, all the contacts will be backed up. 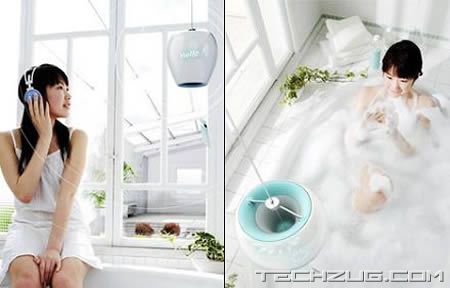 Wind chimes and cell phones seem to be unrelated to each other, but no, this chime definitely is : It will tell you with a charming ringtone every time you have a call. 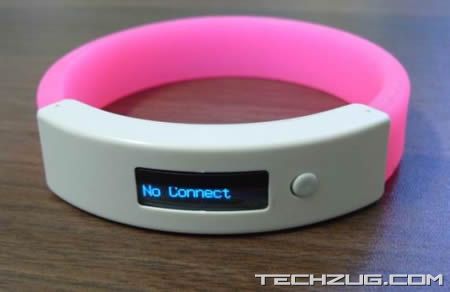 This gadget, shown in a rather charming pink, vibrates and displays the name or number of a caller on an OLED screen when a call is received. Probably the most useful product on this list. While this may seem like a strange product at first, imagine the alternative applications of this technology away from bracelets. As cell phones become more general purpose appliances, the number of uses for a device like this increases exponentially. Imagine a device like this sewn into the sleeve of a shirt, wearable computing is said to be a growing technology and this is surely a forerunner. 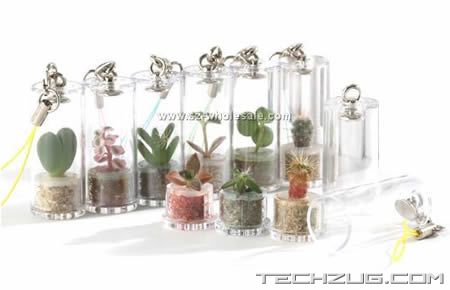 Pioneering a new era of mobile horticulture, the Flash Pet Tree is a jar that combines the flashing function of some cell phone charms with the unparalleled excitement of watching a plant grow. Slowly. The perplexing thing about this product is the sheer pointlessness of it. The futility of a plant in a hermetically sealed container is almost enough to cause an existential crisis for this writer, which is not something one wishes to occur on receipt of a phone call. The sales website promises ‘the fun of raising plants, the scents of joy’ as well as to ‘help busy people of our times be in touch with nature’. Indeed. 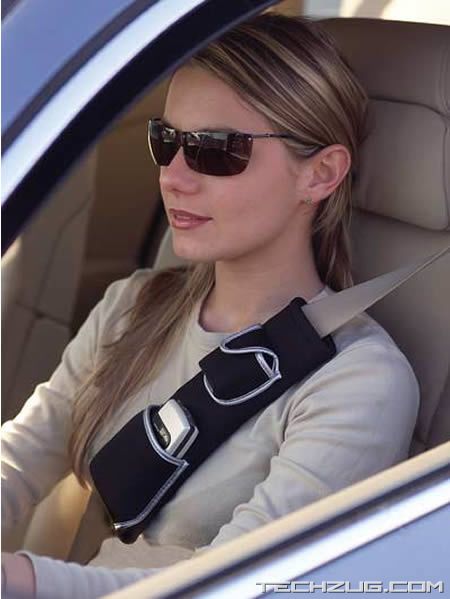 Using a phone while driving usually means taking one hand off the wheel to scramble around for your phone when it rings. Luckily an inventor has solved this tricky problem by creating a £5 holster that fastens your phone right to the seatbelt in front of you. 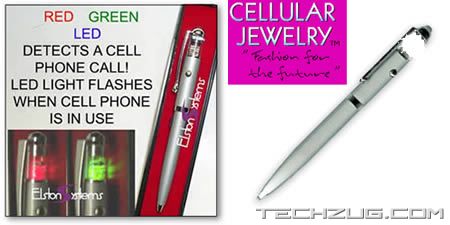 Have you gotten in the habit of tuning out your cell phone’s vibrating ring to the point where you’re often missing your calls? You can avoid that problem by attaching this cell phone pen which is equipped with LED lights that flash when you’re getting a call. It’s a functional pen that doesn’t even need to be attached to the phone to know that you’ve got a call coming in, although you do have to be within three feet of the phone for the pen to work.