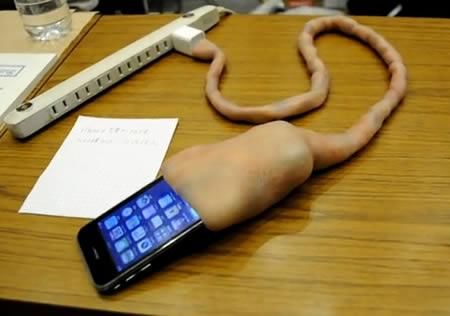 Umbilical cord and iPhone are two things you probably never imagine landing in the same sentence, much less a gadget article’s title. However, you should have known that the iPhone is capable of bridging all sorts of weird gaps. The media artist Mio I-zawa has managed to create the strangest iPhone accessory you will ever come across. Instead of plugging your iPhone into the usual cord, just imagine hooking it up to a squirming umbilical cord. Once it’s plugged in the cord squirms it looks like it’s trying to suck the life out of the iPhone, when in fact it’s restoring the iPhone back to life. People wish you couldn’t hear the electronic device moving so much. It almost kills the visual effect entirely, but it is still a cool gadget in all the wrong ways. 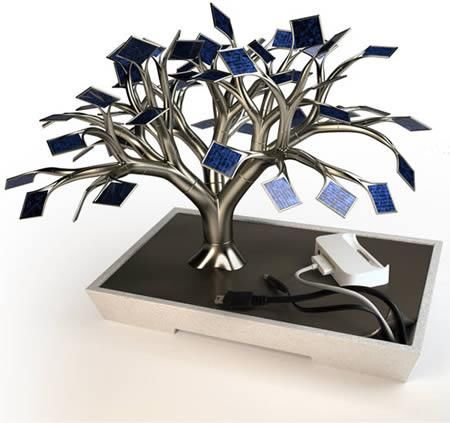 Bold statement, right? But look at this thing! The Solar Cell Tree Charger is an engineered tree with 54 solar cells that charge your gizmos by the sun. While nothing is plugged in a battery charges will power your devices when there is no power. All of the branches are adjustable so that you can make sure each is exposed to the sun. 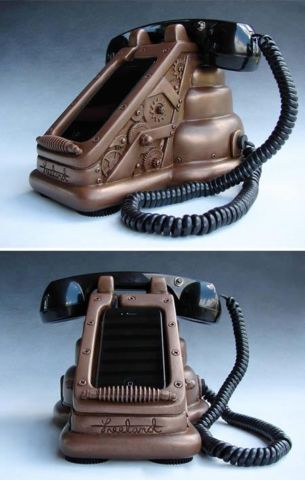 This weird gadget is called the iRetrofone Steampunk Copper iPhone 4 dock, and it looks pretty sweet since it allows you to use the retro handset to use the phone while it’s docked. The dock is made out of copper, so it’s quite heavy. But it’s not its weight that is the only substantial thing. It’ll weigh heavily on your bank account too. Each one is sculpted, cast, and polished by hand artist Scott Freeland, which is why it sells for $450 (USD). Wow, talk about pricey! Heck, that’s more than two iPhone 4s. At least there’s no 2-year contract required with it.

4. Yo Yo iPhone Charger 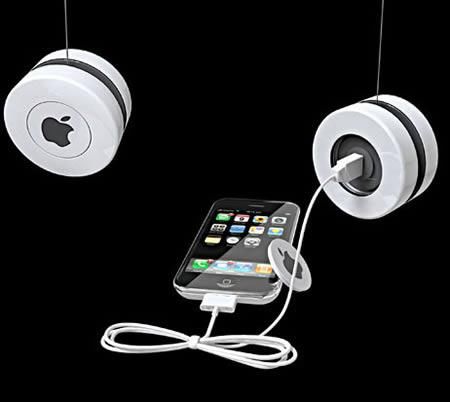 Yes, it is possible nowadays to charge your iPhone the Yo Yo style! An induction powered yoyo charger for Apple. And of course there is a small onboard LI cell to store the electricity generated. So no need to charge as you yoyo. Yoyo and then charge. 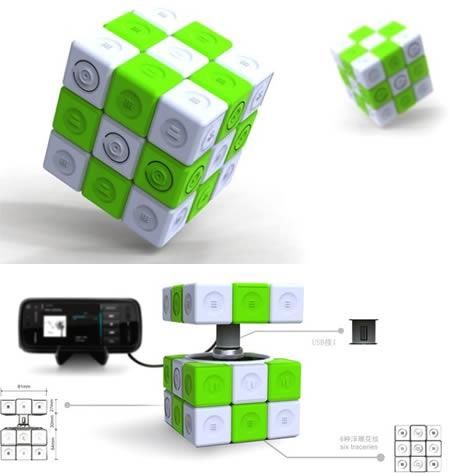 The Rubik’s Cube has conquered the world not just as a plaything, but as a useful device and this is proved by the new conceptual Rubik’s Cube Magic Charger that can charge your gadgets. While the entire World is thinking to save energy and we celebrate Earth Hour and Earth Day, or Environment Day, still, there is a dearth of certain concrete steps taken in this direction. But this new concept of charging your mobile phone or MP3 player, etc. via Rubik Cube is revolutionary. This Magic Charger saves energy that is converted to electric waves used in charging the gadgets. This energy is saved in the internal lithium-ion battery while we play with the cube and electro magnetic induction principles let the cube harness some energy to be further converted for use. I guess you must be wondering from where the charging slots are located; you need to pull the Rubik cube upwards to locate the USB charger. Now you won’t think that it is worthless to play with a Rubik Cube, as you would be contributing towards the sustainable development 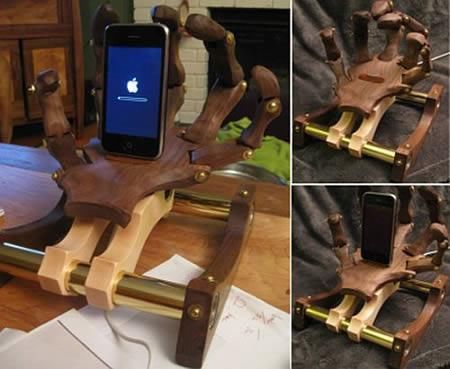 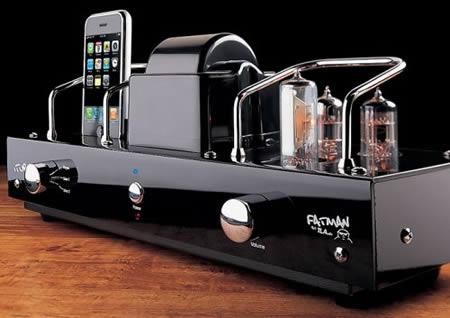 Here’s a great design if you dare to be different. The Vintage iPod Tube Amp/Charger has the cool somewhat steampunk/Sci-Fi look of a mad scientists lair. According to the manufacturer, you can enjoy your playlists with the warmth and richness only a vintage tube amplifier can provide. I don’t know about that, but I love the design.

Just plug your iPod into the Vintage Amplifier/Charger, sit back with the included remote, and browse through your playlists. They claim that audio details that have been lost in MP3 files through compression, dramatically re-emerge through the 25 watts RMS per channel, all-tube pre-amp system. It will cost you a hefty $800 to find out if they are right. No doubt some of us don’t mind missing out on the differences we can’t hear anyway, at that price. 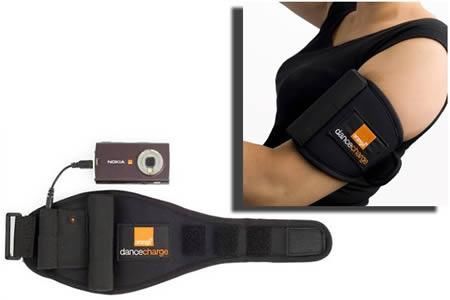 It’s summer, that means music festival time for the pagans. Orange knows this and returns with another solution to keep your Glastonbury-bound portable electronics charged. Revelers will get the chance to try this prototype Dance Charge kinetic charger. Right, kinetic as in movement. With an assist by eco-house GotWind, the 4.25 x 2.5-inch / 180-gram velcro and elastic band converts your chemically-fueled, backbeat twitches into electrical current with the help of a system of weights and magnets. This in turn charges an embedded battery for topping off your portable electronics throughout the multi-day event. 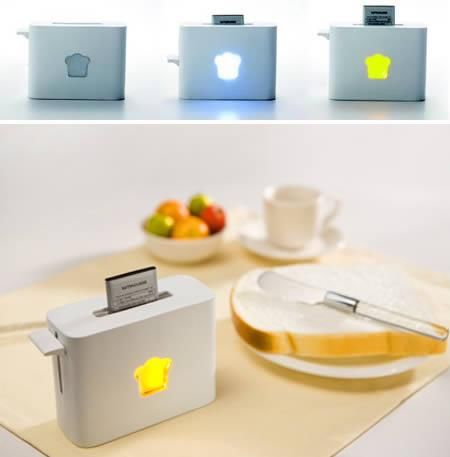 Designer Hyun-A Ko has come out with the Toasty Charger concept, a charger that is shaped like a toaster. It is compatible with all varying sizes of lithium ion batteries, slide one in, push the toaster handle down and when done it will pop back up again like a toast. Hmm I often get a burnt toast. 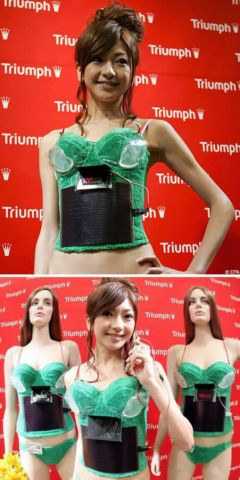 Women who want to clutch green issues close to their bosoms may soon be able to do so with the invention of a solar-powered bra. The canny bit of underwear has been designed in Japan and has the ability to generate enough electricity to power an iPod or keep a mobile phone charged. It works via a solar panel which can be worn around the wearer’s stomach and therein lies the obvious problem  how is the sun going to reach the panel if the woman is respectably attired? Yoshiko Masuda, a spokeswoman for makers Triumph International Japan Ltd, admitted: “It might be difficult to put it to practical use considering people usually cannot go outside without wearing clothes over it, and there may be few places like a balcony or a garden in your house where you can use it outside. Aptly, the ‘Solar Power Bra’ comes in a fetching green colour and can be powered by solar or electrical energy. 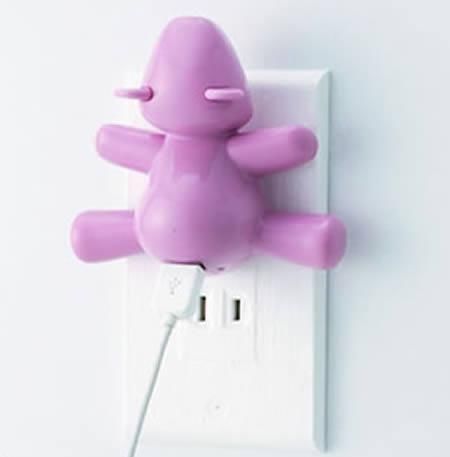 They apparently cost 1980 Yen each ($21.75) although it’s not exactly clear where or how they’re sold, which is probably a good thing.

Orange launched this Eco friendly charger which will be used at this year’s Glastonbury Festival to charges mobile phones, the Orange Power Pump. The Orange Power Pump is basically a foot pump that you hook your mobile phone up to and it will recharge the battery, it basically works by the pump passing air to a charger which features a turbine, the turbine then spins and converts the energy into power. Not a bad idea, and apparently the same amount of foot pumping that is used to inflate a pillow will give a 5 minute charge on your battery.