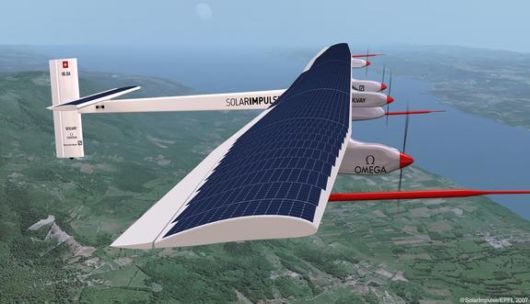 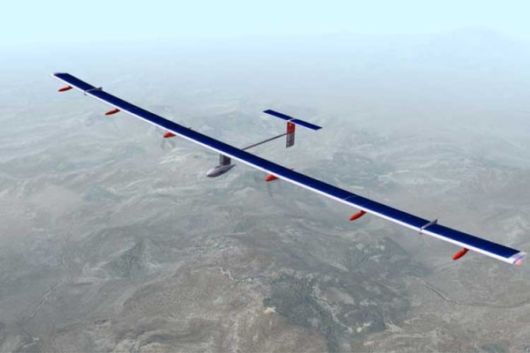 On June 26, worlds first practical solar airplane Solar Impulse is unveiled. The airplane is planned to have 36 hours of non-stop flight. Its a revolutionary airplane. The HB-SIA is the first prototype of the Solar Impulse project.. Its mission is to demonstrate the feasibility of a complete day-night-day cycle propelled solely by solar energy. After fine-tuning on the ground, the aircraft should make its first test flights between now and the end of 2009, first of all at Dendorf airport (canton of Zurich) and then from Payerne air base (canton of Vaud). A first complete night flight is programmed for 2010 and will take place over Switzerland.

We have summed up 8 incredible solar airplanes (pro types, concept) in this post. These airplanes someday are going to revolutionize aviation industry. 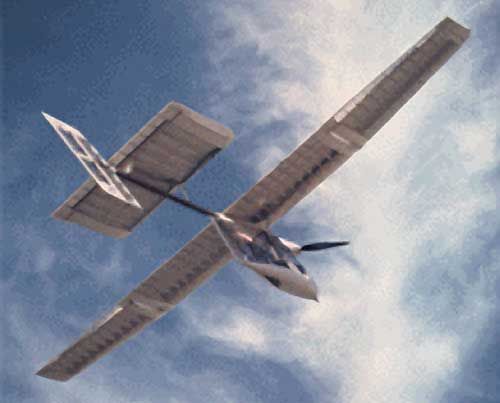 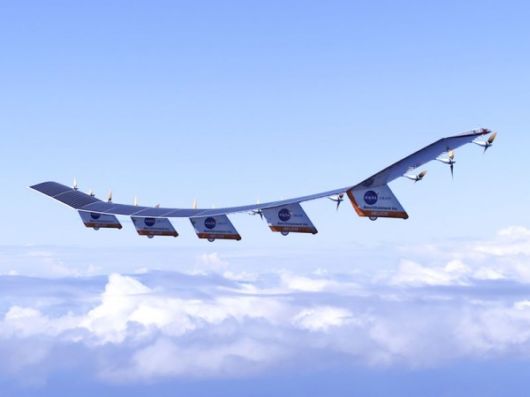 The Helios is a solar airplane by NASA, used for scientific research. Helios is a solar UAV with top speed of 27 mph and wingspan of 247 feet. Its wingspan is wider then Jumbo 747 jet. It has 62,000 solar cells and 14 brushless direct-current electric motors.
Prior to its loss in an in-flight mishap in June 2003, the Helios Prototype set a world altitude record for propeller-driven aircraft of almost 97,000 feet. 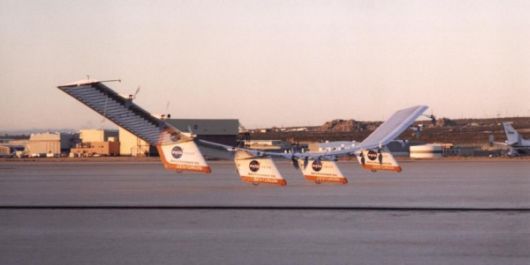 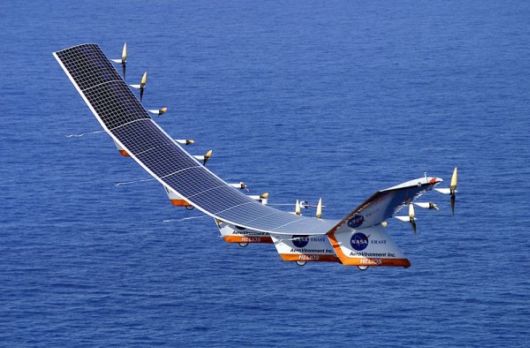 The Centurion is a lightweight, solar-powered, remotely piloted flying wing aircraft that is demonstrating the technology of applying solar power for long-duration, high-altitude flight. It is considered to be a prototype technology demonstrator for a future fleet of solar-powered aircraft that could stay airborne for weeks or months on scientific sampling and imaging missions or while serving as telecommunications relay platforms. Although it shares many of the design concepts of the Pathfinder, the Centurion has a wingspan of 206 feet, more than twice the 98-foot span of the original Pathfinder and 70-percent longer than the Pathfinder-Plus 121-foot span. At the same time, Centurion maintains the 8-foot chord (front to rear distance)of the Pathfinder wing, giving the wing an aspect ratio (length-to-chord) of 26 to 1. 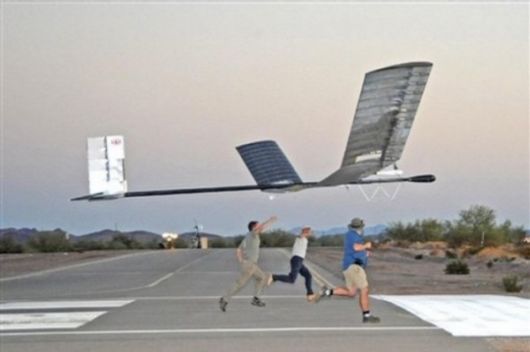 Zephyr, along with solar power, uses low drag aerodynamics to fly for months at an altitude of 132,000 feet. Its yet another high altitude communication platform with a 12-meter solar cells equipped wingspan churning out 1 kW of power to five motors that drag it to 70 metres per second (155 mph). 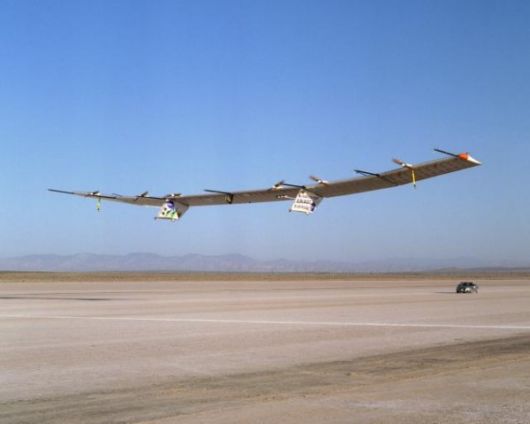 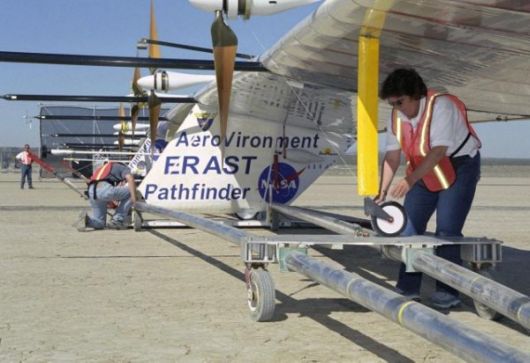 The Pathfinder is a lightweight, solar-powered, remotely piloted flying wing aircraft that is demonstrating the technology of applying solar power for long-duration, high-altitude flight. It is literally the pathfinder for a future fleet of solar-powered aircraft that could stay airborne for weeks or months on scientific sampling and imaging missions.

Solar arrays covering most of the upper wing surface provide power for the aircrafts electric motors, avionics, communications and other electronic systems. Pathfinder also has a backup battery system that can provide power for between two and five hours to allow limited-duration flight after dark.

Pathfinder flies at an airspeed of only 15 to 25 mph. Although pitch control is maintained by the use of tiny elevons on the trailing edge of the wing, turns and yaw control are accomplished by slowing down or speeding up the motors on the outboard sections of the wing. 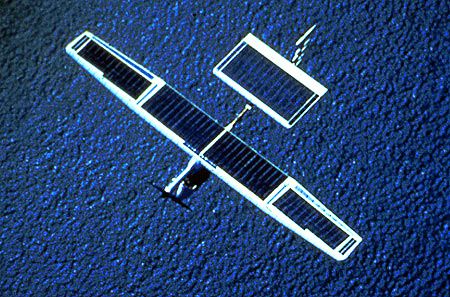 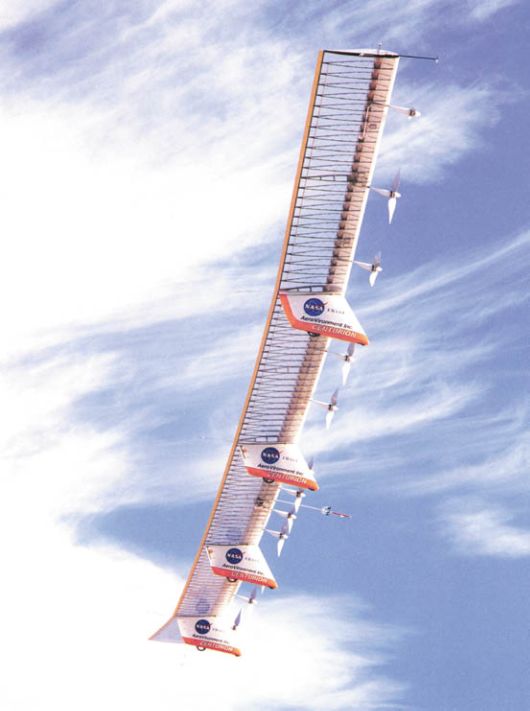 Solar Challenger is an improved version of “Gossamer Penguin”, designed to fly from Paris to England. The aircraft can reach an altitude of 12,000 feet equipped with 16,128 photovoltaic cells giving a tremendous output power of 2,600 watts. Its success gave way to High Altitude Solar (HALSOL) drone project. 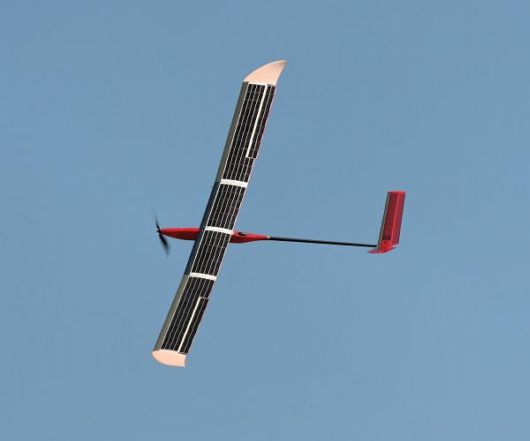 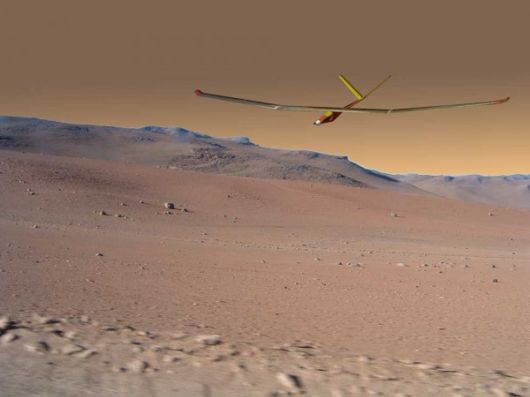 The goal of this project is to design and build a solar powered micro airplane for autonomous exploration. This system, named Sky-Sailor, is fully autonomous in navigation and power generation. Equipped with solar cells covering its wing, it retrieves energy from the sun in order to supply power to the propulsion system and the control electronics, and charge the battery with the surplus of energy. During the night, the only energy available comes from the battery, which discharges slowly until the next morning when a new cycle starts.
This project started in 2004 under a contract with European Space Agency to study the feasibility of a Martian Solair Airplane. The first prototype weighs 2.6 kg for a wingspan of 3.2 meters. The 216 silicone solar cells are able to deliver up to 90 W at noon during summer whereas the power consumption of the airplane is 16 W at level flight. 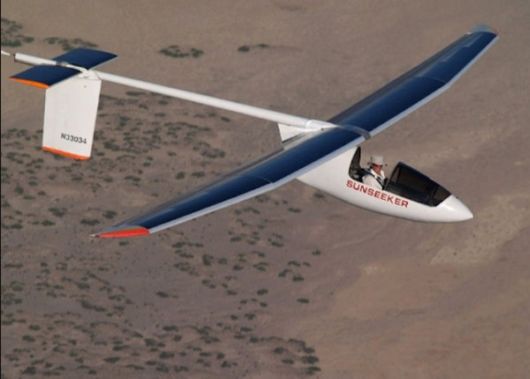 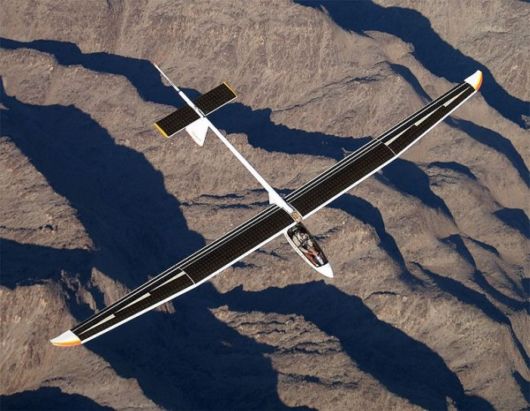 Eric gave shape to Sunseeker after years of hard work, changes and innovations on wings of Larry Mauros SOLAR RISER, Paul MacCreadys SOLAR CHALLENGER, and Gunther Rochelts MUSCULAIR II. The project kicked off in 1986 and was given the final shape in 1989-90 with help of Sanyo and other corporations.