Wi-fi. It’s all around us, quietly and invisibly powering our access to the world’s information. But few of us have a sense of what wi-fi actually is, let alone what it would look like if we could see it.

Artist Nickolay Lamm, a blogger for MyDeals.com, decided to shed some light on the subject. He created visualizations that imagine the size, shape, and color of wi-fi signals were they visible to the human eye.

"I feel that by showing what wi-fi would look like if we could see it, we’d appreciate the technology that we use everyday,”Lamm told me in an email.”A lot of us use technology without appreciating the complexity behind making it work.”

To estimate what this would look like, Lamm worked with M. Browning Vogel, Ph.D., an astrobiologist and former employee at NASA Ames. Dr. Vogel described the science behind wireless technology, and Lamm used the information to create the visualizations. 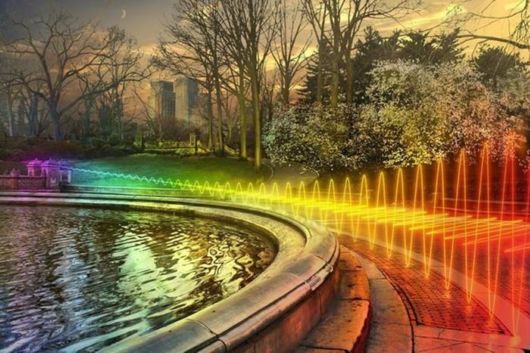 Dr. Vogel provided captions for each illustration explaining the science of wi-fi. The caption for the illustration at the top of the article describes the size of a wi-fi energy field, and how a signal is transmitted. It says:

“Wifi is an energy field that is transmitted as waves. The waves have a certain height, distance between them and travel at a certain speed. The distance between wifi waves is shorter than that of radio waves and longer than that of microwaves, giving wifi a unique transmission band that can’t be interrupted by other signals. Wifi waves are about 3 to 5 inches from crest to crest. The crests of waves is translated to a 1 by a computer, and the the troughs equal a 0. Chains of 1s and 0s that can be translated into the letters, numbers and codes that make up websites, email and other internet content. Typical wifi waves decrease in amplitude as they travel further from the source which is why the waves are larger to the right and smaller to the left, assuming the source is somewhere near the right of the image. This image shows an idealized wifi data transmitted over a band that is divided into different sub-channels, which are shown in red, yellow, green and other colors.”

The wi-fi visualizations are set in Washington, DC. Lamm used data from a map on DC.gov to approximate the size and shapes of wi-fi networks over the National Mall.

Below are Lamm’s images, with Dr. Vogel’s captions underneath. 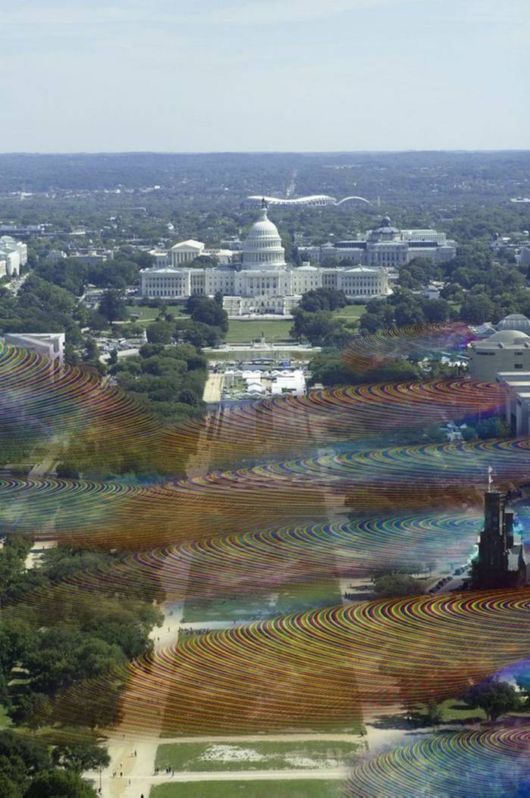 Wifi waves travel through space as rapid, data encoded pulses or waves. A freeze frame of these pulses would show that the pulses are about 6 inches apart (as shown by the lightly colored bands traveling through space in this image). Wifi routers are basically antenna that can send data over multiple frequencies all at the same time. These multiple frequencies are shown as blue, green, yellow, and red colors that pervade the space around the mall. The data from these multiple frequencies swirls around in space as shown here, but can be translated using a common tag system understood by wireless devices. 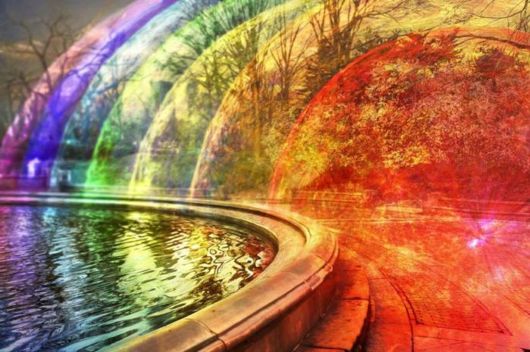 Wifi occupies the radio frequency band of the electromagnetic spectrum between actual radio waves and microwaves (used to listen to the game, and cook your dinner, respectively). This frequency band means that wifi boxes and computers can send and receive data as electromagnetic wave that have a 3 to 5 inch distance distance between each pulse of the wave. The wifi pulses are shown here as multicolored spheres radiating out from the source, near the right of the image. Wifi transmitters are basically an antenna equipped with a transmission protocol that splits the frequency band into several segments, referred to as channels. Data can be transmitted over each channel or in order to send and receive greater quantities of data at faster rates. Although color represents its own unique, visible segment of the electromagnetic spectrum, we use red, orange, yellow and other colors to show the invisible wifi channels that make up the overall wifi signal. Wifi fields are usually spherical (like the one here) or ellipsoidal and extend about 20-30 meters, assuming a typical off the shelf wifi box. 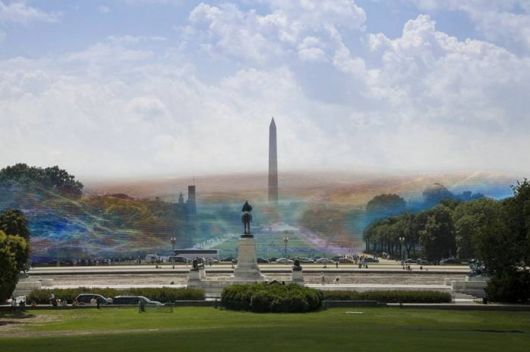 Wifi routers or antenna can be attached to trees, buildings, lamp posts and other structures. A typical outdoor router can project its signal 300 feet or more from its location. Objects such as trees can obstruct the signal such that it has to be augmented by multiple wifi routers placed in different positions. Multiple routers can create a field that extends all the way across Washington DC’s National Mall as shown here. 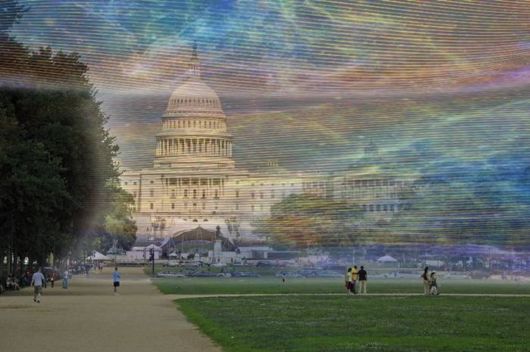 Wifi routers affixed to buildings, lamp posts and other object create a circular data field around them. These antenna have an omnidirectional signal that extends equally in all directions, shown as the circular bands. Wifi broadcasts at a frequency between radio and microwaves, meaning that the waves or pulses are about six inches apart, as shown by the colored, circular bands.

Lamm, a 24-year-old student from Pittsburgh, is focused on using illustrations to bring attention to topics that are otherwise overlooked, he writes on his website. His projects combine art and research, and he often collaborates with other artists, including his mother.

In the last couple months, his projects have visualized what Barbie would look like as a normally proportioned woman, what the average human might look like in 100,000 years, and what New York City would look like on other planets.

As far as wi-fi goes, he’s not the first artist whose curiosity was piqued by the invisible force.

Early this year, Austrian artist and architect Peter Jellitsch measured radio waves to record the wifi activity in a New York apartment over 45 days. (You know, the maddening pattern of how it cuts out and then comes back and is really strong and then is barely working again.) He used the data to sculpt an object that’s a physical depiction of a wifi signal.

A couple years before that, a team from the from the Oslo School of Architecture and Design visualized wifi signals in a Norwegian town by "light painting “them. They created a long rod with 80 lights that lit up according to the signal strength of the wifi network, and filmed the result.

Lamm’s depiction might be the most comprehensive, though. It’s the first to incorporate shape, size, and color into the image, he told me.”I was surprised, wi-fi isn’t as simple as I thought it would be.