The world’s most expensive toy car has been unveiled – but it will set you back a staggering £72,000. The miniature motor is cast in 18-carat white gold and decked out in more than 2,700 blue diamonds.

Underneath the fully working bonnet, the tiny engine is covered in black and white diamonds. 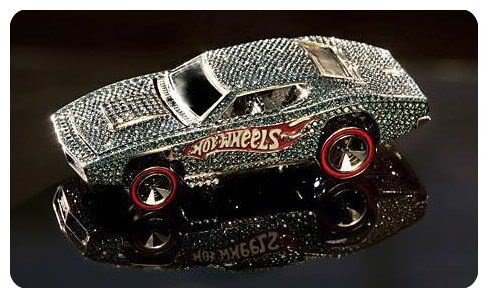 The £72,000 toy car: Covered in diamonds and the most expensive miniature motor ever Created by manufacturer Hot Wheels to mark the company’s 40th anniversary, the car’s tail lights are red rubies while the tyres are set with yet more diamonds.

A spokesman from Mattel, who owns Hot Wheels, said: “This car is the most expensive toy car we have ever made.” The valuable vehicle was unveiled by former Newlyweds star and singer Nick Lachey at the 105th American International Toy Fair.